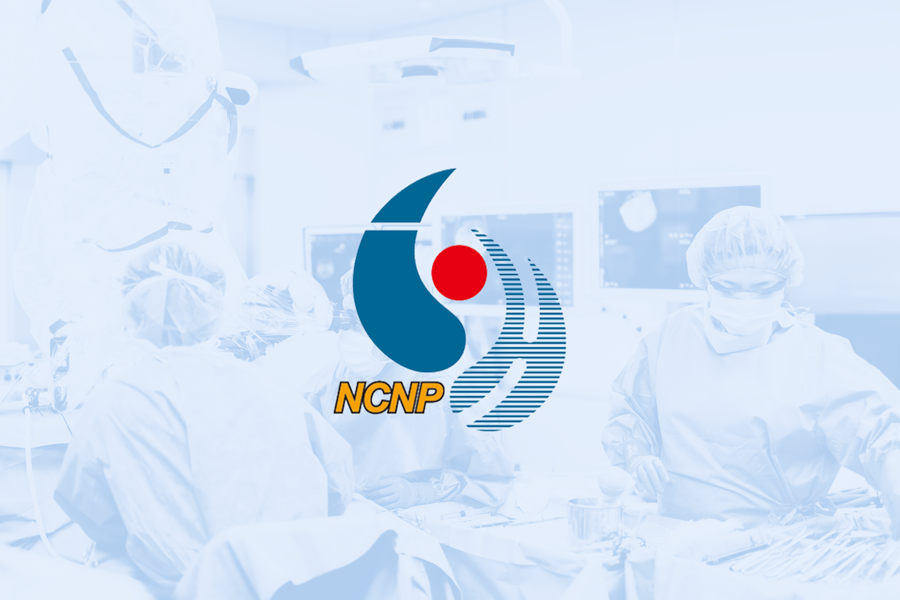 NS-065/NCNP-01, an exon skipping oligonucleotide drug, is expected to be medication for DMD patients with mutation of the dystrophin gene amenable to exon 53 skipping. NS-065/NCNP-01 was discovered through a collaborative research of NCNP and Nippon Shinyaku.

The Study (registered as UMIN: 000010964 and ClinicalTrials.gov: NCT02081625) was the first-in-human, open-label, non-controlled study of NS-065/NCNP-01. Ten DMD patients were allocated to 3 cohorts: 3 patients in a low dose cohort (1.25 mg/kg), 3 patients in a middle dose cohort (5 mg/kg), and 4 patients in a high dose cohort (20 mg/kg). NS-065/NCNP-01 was intravenously administered once weekly for 12 weeks. Registry of Muscular Dystrophy (Remudy) was utilized for patient recruitment in The Study. Primary endpoint was safety. Secondary endpoints were pharmacokinetics and efficacy such as dystrophin protein expression. Main inclusion criteria included having mutation of the dystrophin gene amenable to exon 53 skipping, aged ≥5 and <18, and unable to ambulate in principle. Dystrophin protein expression was assessed by muscle biopsy before and after the administration of NS-065/NCNP-01.

As a result, as to safety, neither serious adverse event nor dropout was observed. As to efficacy, messenger RNA (mRNA) of dystrophin with amino acids reading frame restored by exon 53 skipping was detected in a dose dependent manner. Moreover, significant increases in dystrophin protein evaluated by immunostaining method were observed in 7 out of 10 patients after the administration of NS-065/NCNP-01. In particular, in one patient in the high dose cohort, the ratio of restored mRNA of dystrophin was increased from 0.3% before the administration to 47.8% after the administration, and dystrophin protein expression (100% in healthy subjects) was increased from 0.8% to 17.6% (immunostaining method) and from 0% to 8.1% (western blotting method), respectively.

Based on the above results, Nippon Shinyaku started a phase I/II study in Japan in January 2016 and a phase II study in the U.S. in March 2016. NS-065/NCNP-01 has received “SAKIGAKE designation” in Japan on the grounds that DMD is a serious disease characterized by progressive systemic muscular depression and complicating organ damages afterward, and NS-065/NCNP-01 has an innovative mechanism of action based on exon skipping.

The development of NS-065/NCNP-01 is supported by the following grants.

DMD is an inherited muscle disorder with the highest incidence that is limited to male children. The onset of disease is due to a deficiency in dystrophin, a protein which constitutes the framework of muscle cells. This deficiency arises from mutation of the dystrophin gene and results in progressive muscular depression. There is no effective treatment for DMD other than steroids which retard progression of the disease. Exon skipping is a therapeutic approach based on the use of a synthetic oligonucleotide, known as an antisense oligonucleotide, to restore the amino acid reading frame by artificially skipping certain exons of the transcription product (mRNA) to be translated into protein. Applied to DMD, this approach produces a dystrophin protein that is shorter than normal but still functional, to improve muscle function.

This product is an antisense oligonucleotide drug synthesized from morpholino compounds. Oligonucleotide drugs have a structure similar to nucleic acids, which are the constituents of genes, and they target certain causative genes of a disease. They work by regulating the production of protein from the target gene. They are often called next-generation medicines because they are expected to lead to treatment of diseases that are untreatable with existing small molecules, with high specificity and high safety. NS-065/NCNP-01 has been developed as a therapeutic agent for DMD patients with mutation of the dystrophin gene amenable to exon 53 skipping.

This designation is to promote R&D in Japan aiming at early practical application for world's first, domestically-produced and innovative pharmaceutical products for serious and life-threatening diseases. This system is aiming to shorten a reviewing time for approval, facilitating a prioritized consultation and review for regulatory approval.