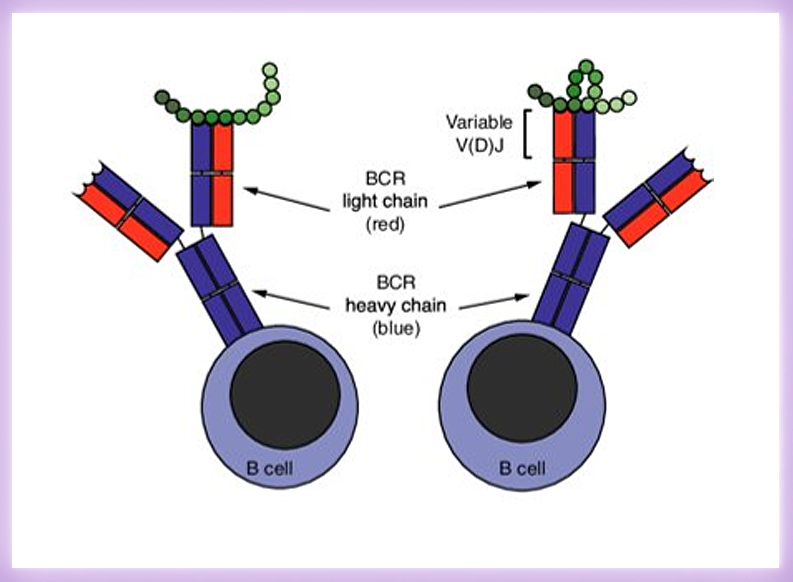 May. 2021
National Center of Neurology and Psychiatry（NCNP）, Tokyo, JAPAN
PDF（263KB）

ME/CFS is a chronic disease that has puzzled doctors and scientists for many years. Patients display profound fatigue over a long period without any obvious cause. Diagnosis is a long process and requires ruling out other possible causes. The lack of clear indicators has unfortunately led to sufferers not being taken seriously despite the extreme effects on daily life. So, developing a method of from a simple blood method that indicates ME/CFS at an early time would revolutionize clinical practice.

Although, the mechanisms causing this fatigue are not understood, growing evidence implicates a problem in the patients’ own immune systems: studies have observed brain inflammation, immune-targeted therapy may be helpful to some ME/CFS sufferers, and it has been suggested that the disease often follows on after an infection has been cleared by the immune system. Recently, patients recovering from COVID-19 often show a package of symptoms, termed “Long COVID”, which are reminiscent of the profound fatigue and brain fog seen in ME/CFS.

The research team focused on B cells, a type of white blood cell of the immune system. These cells have specialized receptors on their surface meant to recognize foreign targets to attack. The pattern of these receptors was different in ME/CFS compared with healthy subjects. This finding, published in Brain Behavior and Immunity by Dr Wakiro Sato and colleagues, showed that this analysis can provide a useful diagnostic marker in ME/CFS.

ME/CFS is a chronic disorder of unknown etiology characterized by profound fatigue, post-exertional malaise, sleep disorders, brain fog and various dysfunctions in the autonomic nervous system among others. Many patients are unable to lead normal daily life and there are no established treatments.

Diagnosing of ME/CFS requires assessment of constellation of typical symptoms and careful exclusion of other diseases, because there is no diagnostic biomarker for this disease.

The onset often follows various infections or infection-related episodes such as fever, suggesting immune reactions to pathogens are important as the trigger. B cells are a subset of immune cells, producing antibodies to fight against pathogens. It has been reported that B cell depletion therapy and/or immuno-absorption therapy which reduces antibodies were effective in some patients. The research team stared out by analyzing patient blood, especially focusing on B cells.

B cells can respond to almost any antigen because of their incredible range of a type of cell surface receptor called B cell receptors (BCRs). This diversity of the BCRs is made possible selecting from by multiple sets of highly similar genes and sticking these parts together to form unique functional genes. These random rearrangements in BCR, especially in the parts of the receptor that selectively bind to potential targets, means that it is possible to get a collection of many millions of different B cells that can recognize any possible target. Together these cells form a key part of the immune system and this range of diverse B cells available to identify and attack infection is called the B cell repertoire. B cell repertoires develop through an individual lifetime and are shaped by the pathogens they have encountered and the vaccinations they receive – with useful populations increased during times of active infection and some effective B cells retained to give immune “memory” of the best defense against those diseases.

Patients, fulfilling the Canadian clinical diagnosis criteria, were recruited from the clinic in the NCNP hospital. The research group investigated the BCR repertoire of ME/CFS patients by unbiased next-generation sequencing of B cell receptor repertoire. With this method, it is possible to calculate the frequency of each of the various types of BCR families possessed by individual B cells.

This indicates that ME/CFS patients may have formed immune responses against particular targets that are not found in healthy individuals. It is possible that these responses cause the symptoms in ME/CFS by disrupting neurologic activity in an as yet unknown fashion.

Biomarkers are molecules linked to a particular disease or process that scientists and doctors can measure to chemically indicate a diagnosis rather than just relying on symptoms. Statistical analysis for biomarkers revealed that patients and healthy subjects can be distinguished with good accuracy. In addition, a follow-up study with patients who participated in the study after the initial analysis reproduced similar results.

In particular, the BCR family with IGHV3-30 (and closely related 3-30-3) was significantly increased in patients who developed ME/CFS after infection-like episodes. CDR3 (complementarity determining regions 3), is the most important site for binding to an antigen. They found that a specific length of CDR3 of IGHV3-30 (3-30-3) was particularly increased in patients with especially abundant IGHV3-30, suggesting strong selective process by specific antigens. 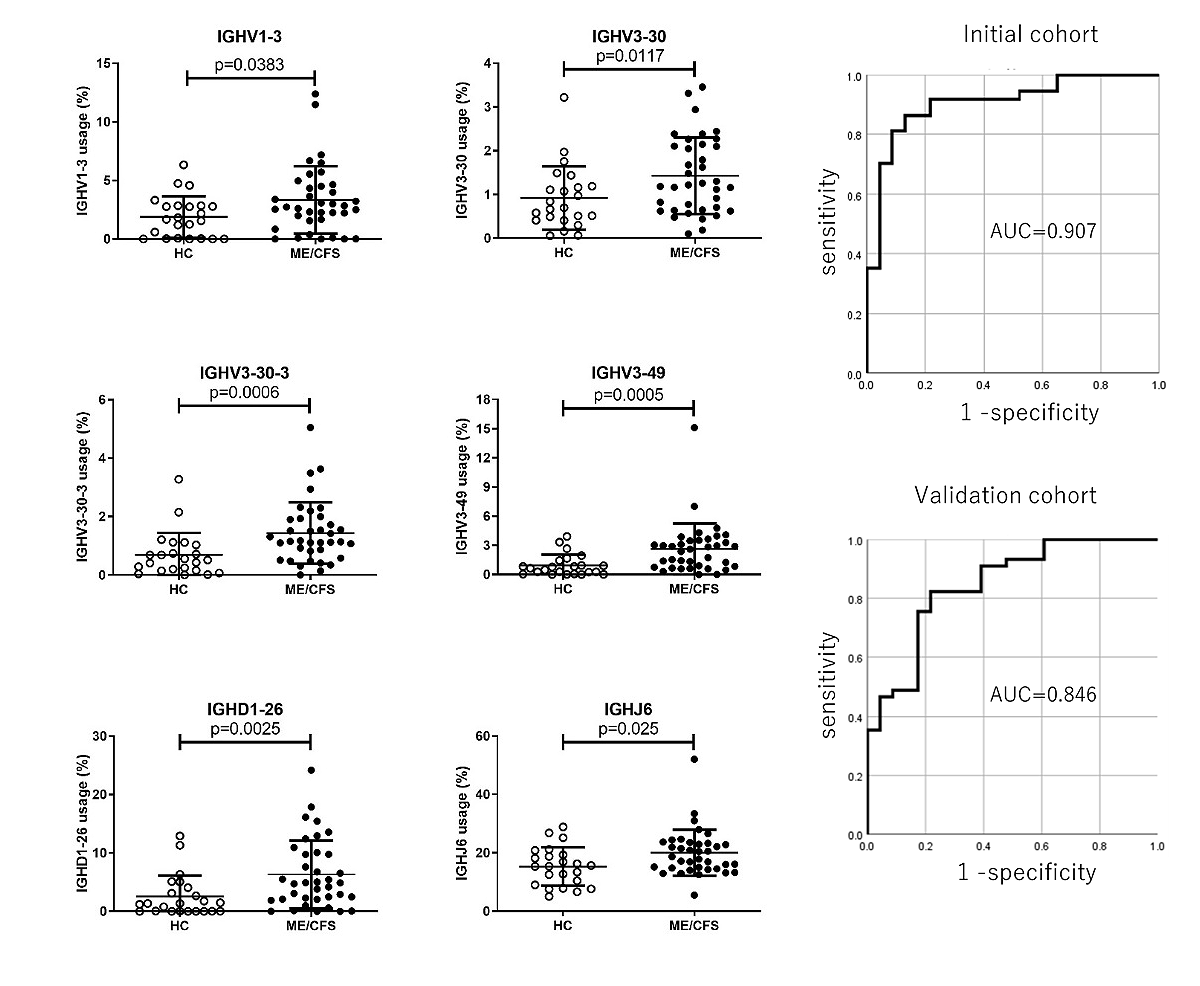 On the other hand, they examined subsets of B cells using flow cytometer. It was found that the frequency of B cells was significantly higher in the patient group than in the healthy subject group. Intriguingly, a type of B cells called plasmablasts was increased in about 20% of ME/CFS patients.

A comprehensive gene expression analysis was conducted on patient-derived plasmablasts. They found that expression of genes called interferon-inducing genes is enhanced in the patient's plasma blasts. In addition, IGHV3-30 (and 3-30-3) was found to be more frequent in patients with particularly increased interferon-inducing gene activity in plasmablasts.

Previous reports indicate that IGHV3-30 (and 3-30-3) are B cell receptors that are induced by influenza virus, malaria, and COVID-19 infections. Since various pathogens are thought to react with B cells having this B cell receptor, the antigen is not necessarily derived from the pathogen, but may be derived from autologous or symbiotic microorganisms such as gut commensal bacteria.

1) They revealed a previously unknown abnormality of B cell receptor repertoire in ME/CFS.
2) B cell receptor repertoire analysis could provide a useful blood diagnostic test for ME/CFS.
It has been reported that B cell depletion therapy and immunoadsorption therapy can be effective for some ME/CFS patients. This method could be utilized to develop such immune-targeted therapy for ME/CFS patients. 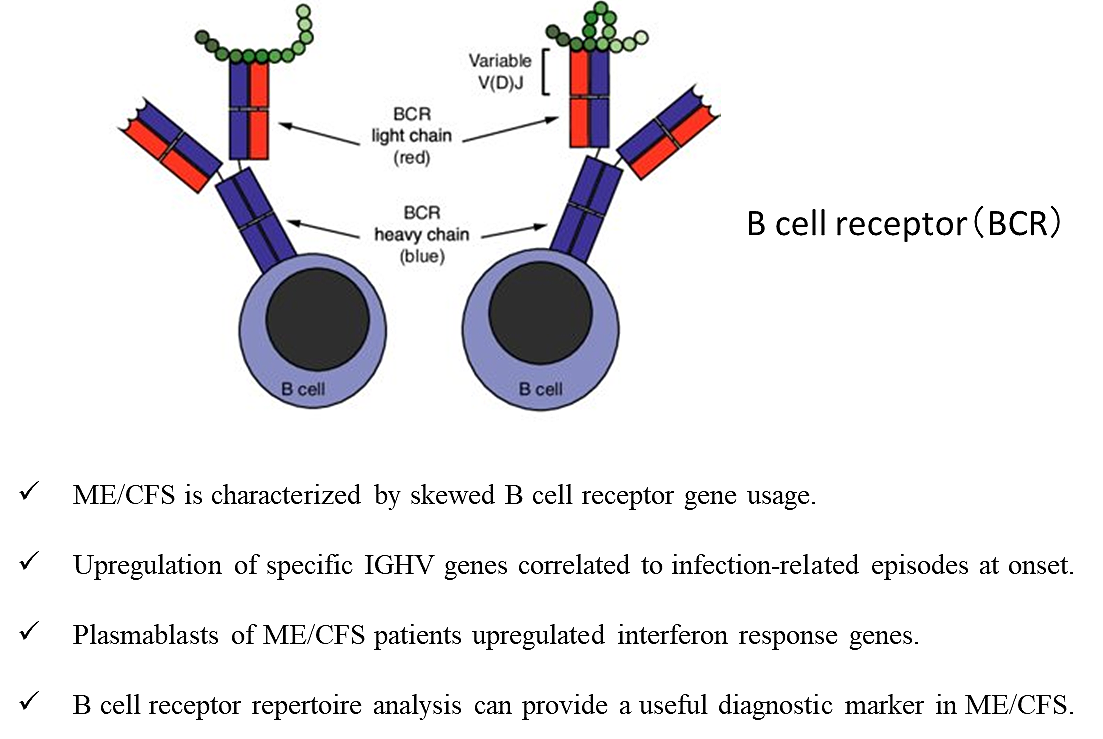 ＊１ B cell receptor repertoire analysis
B cells, one of the major lymphocytes types, express B cell receptors (BCRs) on the cell surface as receptor molecules that recognize antigens. B cells are activated when antigens such as pathogens bind to them. By mechanisms called gene rearrangement, various BCRs are produced and it is possible to react with various antigens. A diverse collection of BCRs is called a BCR repertoire. Specifically, a BCR consists of V (variable), D (diversity), and J (joining) genes, which are called IGHV, IGHD, and IGHJ genes, respectively. Next-generation BCR repertoire analysis is an analysis superior in the quantification compared to conventional technology using unbiased gene amplification technology and special bioinformatic software.
参考URL：https://www.repertoire.co.jp/research/technology/repertoire/