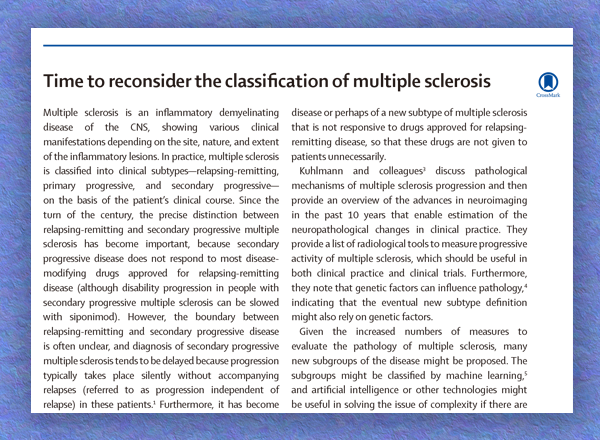 Multiple sclerosis (MS) is a major cause of neurological disabilities, which generally starts under age of 40. The patients with MS have various symptoms related to inflammation in the brain or spinal cord, such as tingling sensation, numbness, double vision, walking difficulty, fatigue and cognitive dysfunction. MS is an autoimmune disease associated with activation of the immune system to brain components. Traditionally, patients with MS are grouped into a few categories, based on clinical picture of the patients; Relapsing-remitting MS, and progressive MS.

Owing to the development of new drugs after the turn of the century, relapses (repetitive occurrence of a sign of the brain inflammation) are prevented by a suitable drug in many patients with MS. However, the effects of a drug in a patient are not necessarily seen in other patients and the most of the drugs currently approved by the authorities are not effective in slowing the silent progression of disabilities in MS. If we can predict the effects of a drug in each patient beforehand, patients will be freed from the stress for receiving a drug that is actually not helpful for him/her, though it may be for others.

Dr. Takashi Yamamura at NCNP raised the argument that classification of MS should be drastically revised so that the patients’ and physicians’ need will be met towards for treatment with prediction or “precision medicine”. He showed the example that a test to measure an element of protein (anti-AQP4 antibody) in the blood are very helpful to isolate a group of patients who will markedly improve with an approved drug (Yamamura et al. New England Journal of Medicine 2019). Also, by citing the works of his research team, he emphasized that measuring the number of a group of lymphocyte (Eomes-positive Th cells) is helpful to make diagnosis of progressive MS (Raveney et al. PNAS 2021). Surprisingly, even testing bacteria in fecal samples may assist the diagnosis of MS and tell us if the patient is in the early stage or late stage (Takewaki et al. PNAS 2020). He concludes that it is time to reconsider the classification of MS, which should be assisted by blood test for a new biomarker like Eomes, MRI brain image, genetic information, or gut bacteria.

Dr. Yamamura is currently the Director of Immunology Department and the Director of Multiple sclerosis center, NCNP. He is a neurologist and physician scientist, internationally recognized in the research for development of biomarkers and new drugs for MS and related disorders. He discovered the role of gut microbiome in multiple sclerosis and has served as a project leader for development of new therapies in many government-supported projects.